The management put their reason for success down to a few things the main one being customer care at a standard never offered before for three-wheelers in the Philippines.

The management of Tuk Tuk 3-Wheelers has it roots in Europe and they said even before they opened they would give European style customer service and that is exactly what they have done.

At Tuk Tuk 3-Wheelers they believe that the first step in customer care for any vehicle is having spare parts at hand. It is impossible to provide good customer service if customers have to wait for parts. 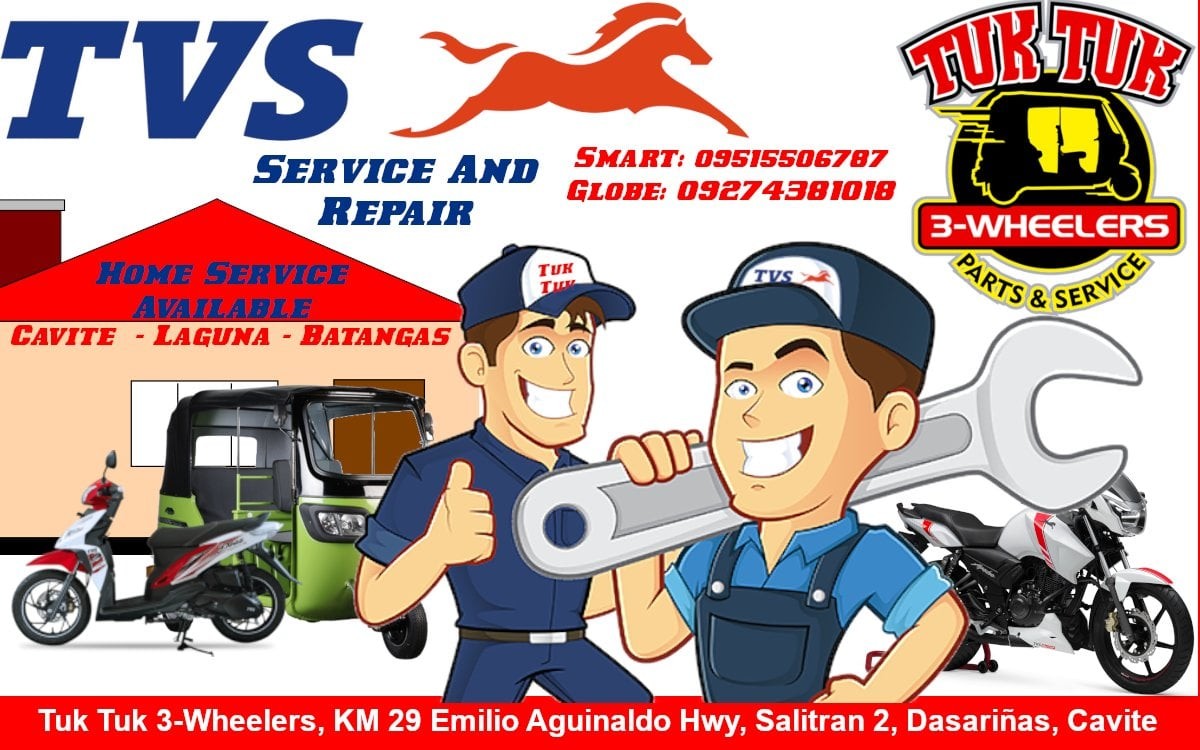 They soon realised that there was a problem with parts not just in their own area but nationwide, so they turned their website into an online store for TVS parts and offer quick delivery nationwide.

Next they looked for resellers and now provide parts to resellers all over thee Philippines.

The management admit motorcycle spare parts is still a work in progress they said with the number of models it is going to take us time to stock all the parts, but our aim is by 2022 we will stock every spare part for every TVS Motorcycle. We are getting more parts delivered weekly.

When you see Tuk Tuk 3-Wheelers Mechanics you might notice something different from mechanics you are used to seeing at Tuk Tuk dealers, and that thing is they are older.

Tuk Tuk 3-Wheelers hires older more experienced mechanics the reason being when it comes to mechanics experience matters most. Yes you can learn to be a mechanic on a corse but what they can’t teach you is experience.

Tuk Tuk 3-Wheelers have a close working relationship with our mechanics, it is not an us and them relationship, it is a team where we all work together. Management and staff can often be seen talking laughing and joking together and management is always ready to listen to any problems and advice from our staff.

Coming from Europe the owners of Tuk Tuk found it very strange that just an oil change was regarded ass a service by many vehicle dealers in the Philippines.

For Tuk Tuk a service is a major check up, checking for faults, ware and anything else that could affect the safety, reliability and performance of the vehicle.

So when you get your TVS serviced by Tuk Tuk 3-Wheelers it is far more than just an oil change it is a major check up.

If you follow any of the TVS groups on social media you might have noticed there is not one bad comment about Tuk Tuk 3-Wheelers only praise.

And often on threads our customers will recommend Tuk Tuk 3-Wheelers to others.

Success During a Pandemic

It really has not been easy for Tuk Tuk 3-Wheelers, they planned to open on the 16th of March 2020 but with news of the lockdown about to happen on the 17th March opening was delayed.

It was not until June that they were finally able to open, it was 3 months of expenses with no way of making any income. The management admit that they thought about giving up on the idea and counting their losses.

The only thing that kept them going was their passion for Tuk Tuks and their desire to offer better service to Tuk Tuk owners. Plus the confidence that by providing good service they could be successful.

Tuk Tuk 3-Wheelers still strongly believe that if they can offer a level of customer service of a level never seen in the Philippines before they will be able to come out the other side of the pandemic and grow.

Tuk Tuk 3-Wheelers will be opening a second branch in Antipolo in the next few weeks.

A service centre in Antipolo has been an aim of Tuk Tuk since before they opened but with travel restrictions it has taken far longer than they hoped because of the difficulty finding premises when they could not travel.

They have now found premises and are at this time sorting out business permits and will be open soon.

The Future of Tuk Tuk 3 Wheelers

Tuk Tuk 3-Wheelers plan to open more service centres with in the next 12 months and stock an even larger range of spare parts. They also hope to be able to offer finance soon.

A Big Thanks to Our Customers and TVS

A huge thanks to Tuk Tuk 3-Wheelers customers we could not provide the service we do without you.

Thanks to all that have recommended Tuk Tuk 3-Wheelers.

We would also like to thank the management and staff at TVS for their help and support, plus putting up with me and my complaining ways, it has been a learning curve of cultures for all of us. There is nothing personal in it when I complain or shout it is just I come from a culture where when things are not working in the way we want them to we complain and shout.