The history of the Tuk Tuk also known as the Auto Rickshaw is disputed, some claim the first Tuk Tuk was in 1947 others claim it was 1934.

We take a look at these claims and put a spanner in the works as we believe the first Tuk Tuk dates back to 1886.

Some say the first Tuk Tuks were in 1934 and were Japanese. 3 wheelers were being exported from Japan to Thailand in 1934 but were they Tuk-Tuks? In our view, they were not Tuk Tuks as they were just motorbikes with 3 wheels. The front of them was simply a motorbike with a two-wheeled axle fitted at the rear. So you can hardly call them a Tuk Tuk.

Who did make the first Tuk Tuk?

We believe it was the Germans, in 1886 the Germans applied for a patent for a vehicle that had 3 wheels, two at the rear and one at the front. The vehicle also had a single-cylinder rear engine and was steered by a handle.

Notice how similar that is to today’s Tuk Tuks surely it has to be a Tuk Tuk, the engine even made a tuk tuk tuk tuk sound as it drove by and it is that sound that the name Tuk Tuk comes from.

So the first Tuk Tuk was also the first car. Newspapers reported on July 1886 the first outing of the Benz Patent Motor Car which was a three-wheeled car.

For anyone that makes the claim a Tuk Tuk is not a car because it only has three wheels the fact that the first car also had three wheels proves you are wrong.

If you take away the petrol engine factor of the Tuk Tuk you could even date the Tuk Tuk back to 1769 when Nicolas-Joseph Cugnot invented the first self-propelled vehicle, it was powered by steam and had three wheels.

The Japanese claim to the First Tuk Tuk

The claim that the first Tuk Tuk comes from Japan dates back to 1934, however research seems to point to these being more of a motorcycle adapted into three-wheelers by putting a 2 wheeled axle on the rare.

The Japanese Ministry of Posts and Telecommunications donated about 20,000 used three-wheelers to Southeast Asia we are unsure of the date of this. 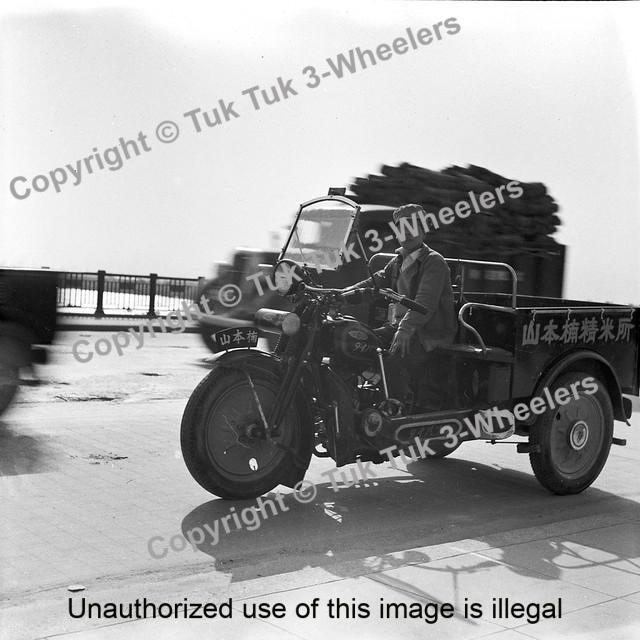 We believe these Japanese three-wheeled motorcycles are far to close to motorcycles to be classed as Tuk Tuks.

While the British do not claim to make the first Tuk Tuk they were, in fact, making vehicles that could be classed as Tuk-Tuks back in 1929 so they predate both Japans claim and that of Piaggio.

It was the Raleigh Karryall that lead to the formation of what turned out to be one of the best-known manufactures of three-wheeled cars in the world the Reliant Company, the company that went on to build the famous Reliant Robin.

The Raleigh Karryall was a three-wheeled delivery van with motorbike-like controls in the early models, it was designed to carry 5 cwt (254kg) and was powered by a 598cc single-cylinder engine. It was fitted with a three-speed gearbox plus a reverse gear.

In later models of the Raleigh Karryall they put 2 seats in the front and switched from motorbike type control to a steering wheel, they also increased the size of the engine to 750cc.

World War II had hit Italy hard and the economy was in a poor way. Four-wheeled cars were beyond the reach of many Italians at the time, there was also the fact that many of the narrow streets of Italy were not suitable for four-wheeled vehicles. The roads in Italy were also in a bad state of repair after WWII, Italy needed a way to get the country moving again.

During WWII Piaggio had been building fighter aircraft but their Pontedera factory had been demolished by bombing.

Because of this, they needed to rebuild and the fact the end of the war meant there was little demand for fighter aircraft Enrico Piaggio decided to move production away from aeroplanes and do something to help Italy’s transport problem.

Firstly to get people moving again Piaggio started to build scooters and that solved the problem of people being able to get about but did nothing to solve the problem of moving goods.

In 1947 Corradino D’Ascanio who was an aircraft designer and also the inventor of the Vespa scooter decided what was needed to help Italy’s reconstruction was a lightweight commercial vehicle. It was decided that a three-wheeled vehicle was best suited for the job.

The very first Piaggio Ape was mechanically the same as a Vespa Scooter but with two rear wheels and a flatbed on top of the rear axle.

When they first advertised the Piaggio Ape it was advertised as a VespaCar. It came with a choice of 3 engines a 50 cc. 125 cc or a 150cc.

It was not until 1964 that a cab was fitted to the Piaggio Ape to protect the driver. 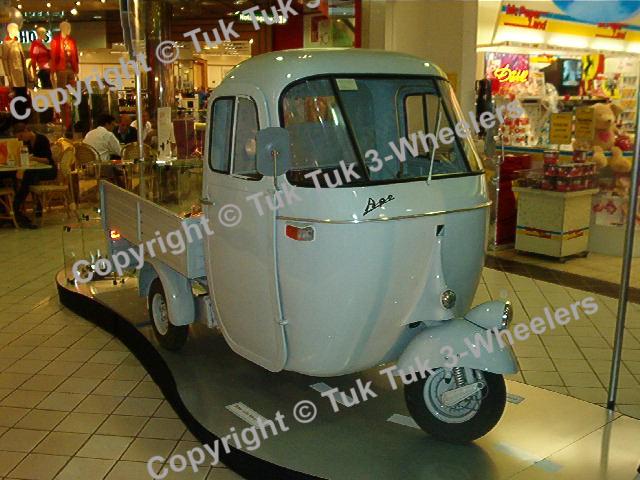 Ape in Italian means bee and it got its name from the bee-like sound the engine made.

Many different body designs were added to the Ape such as van, tankers, passenger and even fire trucks.

The adding of the passenger body saw the Piaggio Ape being used as a taxi as many Tuk Tuks are today.

We suspect that Corradino D’Ascanio never dreamed his invention would take off in so many other countries and create what has become a national icon in India, and 72 years later would still be in production.

The year was 1979 I was a 22-year-old Soulboy and a Scooterboy, my first love was Northern Soul Music and my second love was Lambretta Scooters. Most weekends were spent at all-night dances in places such as Wigan Casino but Bank Holiday weekends were different they were for scooter rallies and we would ride our scooters hundreds of miles to attend these scooter rallies.

The Event was Southend Scooter Rally organised by the Lambretta Club of Great Britain, it was a time when the interest in scooters was growing again and over a thousand scooters turned up for what at the time was the biggest scooter rally since the 1960s.

We were walking around looking at all the scooter and there it was a Lambretta three-wheeled fire engine. I instantly fell in love with it. It was the first Tuk Tuk I had seen in my life and my love of Tuk Tuks started.

In the second part of the 1940s, Vespa and Lambretta were both building scooters and there was a lot of rivalry between not just the companies but also the owners, it was a rivalry that in company terms lasted until 1997 and for owners continues today.

Lambretta called the three-wheelers Lambro after the name of the river that ran close to their factory.

It was another 10 years before they added a cabin to it making it more like the Tuk Tuks of today, this model was called the Lambro FD.

It was around 1960 that Lambretta started to add the size of the engine to the name. With the Lambro Li 175 and 3 years later the Lambro 200.

The rest of the history of the Lambro is long and complex so needs an article of its own, maybe at a later date, we will do it.

To keep it short, production moved to India and it ended up getting bought out by Scooters India Ltd a state-run enterprise.

Today many will say the Lambretta three-wheeler is no more but that is not strictly true because Scooter India Limited produces the Vikram three-wheeler which is powered by Lambretta Engines.

The Bajaj Three-Wheeler was a latecomer to the history of the Tuk Tuk as it was not until 1971 they started to produce their own Auto Rickshaws before that year they were building the Piaggio Ape under license.

Despite being a late starter Bajaj RE has gone on to become the largest manufacturer of three-wheeled cars in the world and for that very reason, we will be doing a separate article on the History of the Bajaj Auto Rickshaw soon.

History of the name Tuk Tuk

While researching this article we made an interesting discovery.

You will often read that the name Tuk Tuk comes from the sound of the engine and we believed this ourselves and have even mentioned it in this article, however, we now believe this might not be correct.

The reason we are no longer sure if it is correct is that we discovered in Italy they are called Tukxi. We can not find what Tukxi means if anyone can tell us please let us know. It could be that Tuk Tuk came first and Tukxi is just a shorter version of it. However, it does seem that the term Tukxi may have been in use before the term Tuk Tuk and before the Tuk Tuk was in India.

They claim the term Tuk Tuk came from the British that visited Asia and named it Tuk Tuk because of the sound the engine made. The fact we have discovered the word Tukxi was used before Tuk Tuks arrived in India seems to point to it being a Tukxi before it was a Tuk Tuk.

Bajaj RE Vs TVS King Auto Rickshaws Who will win?

Fitting a New Windscreen Windshield in a Auto Rickshaw 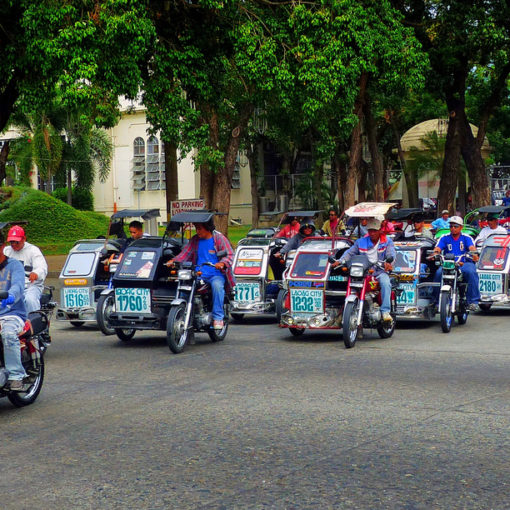 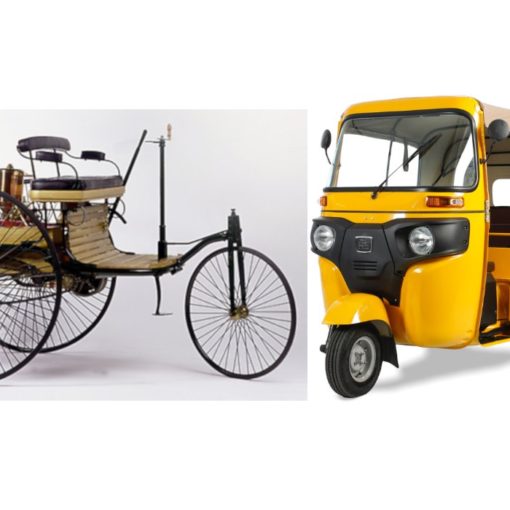 Last month we reported on how BBC Top Gear ranked the Bajaj RE as the most versatile car on the planet. Claiming […]

2 thoughts on “The History of the Auto Rickshaw Tuk Tuk”