Skip to content
Home » History » The History of the Philippines Tricycle

I decided to research the History of the Philippines Tricycle after I saw a comment yesterday from someone who said he was proud of the tricycle because it was Philippines made, I find it a strange thing to be proud off as it has to be one of the most uncomfortable forms of public transport in the world.

History of the word tricycle

First lets look at the history of the word tricycle. The term was first used by a French newspaper The Journal de Paris used it back in 1789 on 27th July they came up with the word tricycle to differentiate between a bicycle and a tricycle, when they reported on Two Frenchmen, named Blanchard and Maguier who had just invented a 3 wheeled bicycle.

The First Motorbike and Sidecar.

In 1903 Mr. W. J. Graham of Graham Brothers, Enfield, Middlesex, England was granted a provisional patent for a motorbike and sidecar. Graham and his partner Jonathan A. Kahn began production in that same year.

So the first Motorbike and Sidecar was a British invention.

The first sidecar predates the first motorbike and sidecar by 10 years.

A French Newspaper offered a prize for the best way to carry a passenger on a bicycle and a French army officer, Mr M Bertoux won that prize with his invention of a sidecar for a bicycle.

First Tricycle in the Philippines

No one seems to be sure when the Tricycle first appeared in the Philippines, but many claim it was first seen during World War II when the Japanese invaded the Philippines.

This claim is probably true as the Imperial Japanese forces during World War II used the Rikuo also known as the Type 97 motorcycle, which was a copy of a Harley-Davidson motorbike with a sidecar. Sankyo Company under license from Harley-Davidson started building Motorbikes and sidecars in 1935, later they were also built by Rikuo Nainen Company.

It is ironic that the USA granted a license for the Japanese to build a vehicle that just a few years later would be used in the invasion of the Philippines.

It is also very possible that the Americans had already shipped some Motorbikes and Sidecars to the Philippines before the Japanese arrived, but we can find no evidence of this and if they did it was not in large numbers. 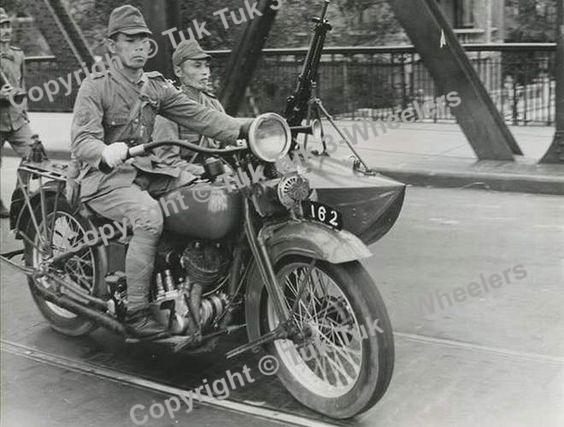 Japanese Soldiers on a Rikuo type 97 probably the First Tricycle in the Philippines.

The decline of the Motorbike and Sidecars

In much of the world, the Motorbike and Sidecar had already gone into decline in the 1920s when more affordable cars became available.

Many tricycles in the Philippines today are badly built and with little thought for the passengers.

There is no national design standard so the vast majority of tricycles have not been engineered with safety in mind. It seems like anyone that can use a welder can build a sidecar to bolt onto a motorbike.

With a maximum safe speed of 40kph in my mind they have no place on the roads of today, when you are stuck in a line of traffic crawling along at 30kph you can bet your life there is a tricycle at the front of it.

Many of the drivers have little or no respect for other road users and on a road with 2 lanes in each direction, they often sit in the left lane meaning you have to undertake them. It is also common for two of them to be side by side racing at 30kph meaning no one can pass them.

Emergency braking often results in the accidents since brakes are fitted only to the motorcycle wheels and not to the sidecar, resulting in it pulling to one side and often flipping over.

The Motorbike and Sidecar was British invention in 1903 and it was probably 38 years later that this invention arrived in the Philippines.

It was the Japanese that brought the Tricycle to the Philippines.

By the time the tricycle arrived in the Philippines, it was already in decline in America and Europe.

So holding onto this outdated mode of transport in the belief it is a Philippines thing and something to be proud of is unfounded.

2 thoughts on “The History of the Philippines Tricycle”